Recently I took in trade a Trek 5th District from a friend for a Campagnolo group set and some cash.  I was with my friend when he purchased the trek at a LBS back in April.  He had hardly any miles on the bicycle when traded it to me because as he said "The bike just does not ride well, It makes all kind of noises."  I said I could give it a tune-up and see whats going on, but my friend had already moved on to his next bike and had enough so I took it in trade.

I have always really liked this bike when it first came out, I am a fixed gear nut (This bike is a Single speed with a flip flop hub.) and have always had a soft spot for Coffee color.  The retro style also caught my eye.  I really wish the bike was bigger and I would keep it, but being a medium it does not fit my 6'-4" frame.

I test road it and he was right, it was loud and did not ride right, awful knocking and creaking noises and grinding.  The local LBS should be ashamed for ever letting a bike out of there store like this, especially at just a little under the MSRP of $799.99.  I am tempted to give the name out.

First thing I did was start with the front wheel noises, first about half the spokes where improperly tensioned even with the wheel fairly straight.  I properly tensioned all the spokes and trued the wheel.  The bearing cones where way to tight, to the point of grinding and with almost no grease at all.  I greased and set the cones properly.  The front wheel is now a dream to spin, the tire still has all the mold marks, a very ice wheel now, and silent.

I did the same for the rear wheel, spokes where way out of tension and the cones set way to tight.  Fixing both wheels cleared up half the noise the bike was making.

With the wheels done I test road the bike again to get a bearing on where the next set of noises where coming from.  Two places, the bottom bracket and the single speed freewheel.  First thing I did was remove the freewheel, an awful knocking / clunking sound came from it when you applied any force to it at all.  After further inspection of the freewheel Trek just put a really crappy freewheel on it with a lot of play.  Maybe it was just a bad freewheel but I am guessing not, quality was just a bad choice.  In the photo below, the original freewheel is on the right, you can see the dark somewhat wide gap all the way around where the cog meets the freewheel, there is a ton of play in the gap.  The left side is a new Shimano freewheel, very tight and very smooth.  In the end, crappy poor choice by Trek replaced with a good freewheel. 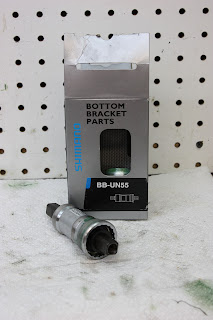 Test ride and the Trek District is fast, smooth and most important, dead silent.  The last thing I did was tune the brakes a slight bit and adjust the rear drop out so the rear wheel is better aligned.  And I forgot, new pedals.

Who ever get this Trek 5th District you are getting a brand new bike with at the most 10 miles on it.  The condition of the bicycle is new and with the new parts the Trek is better then new.  And for a price way below new.


I think this would be a wonderful bike for commuting with all the hardware to attach racks and fenders, cursing the neighborhood, running around town doing earns, hitting the coffee shop with friends and my favorite bar cruising.

John
Gurnee, Illinois, United States
Hello, and Welcome. My name is John, and I repair, restore and recycle bicycles. I now live in Gurnee, Illinois. Bicycling and bicycles are my passion. "The Bicycle is the most noble invention." after all. I am a self taught bike mechanic over many years, there is very few things I have yet to repair or restore on a bike.

If I Helped or Supplied Some Insperation & Entertainment Donate $1